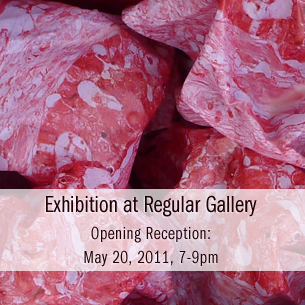 Phoenix, AZ – Regular Gallery proudly presents “Girl Plays in Radioactive Dirt,” a compelling solo exhibition from Lisa Marie Sipe. The exhibition takes place at Regular Gallery in downtown Phoenix from May 20 to June 11, 2011. A reception with the artist will be held Friday, May 20, 2011 from 6 to 9 p.m.

Sipe’s latest series, “Girl Plays in Radioactive Dirt” uses encaustic (pigmented wax) and mixed media on found objects to create sculpture to chronicle the artist’s reaction to her aunts recent death. Sipe discovered her aunt had been 65 miles away when a nuclear bomb was tested on May 25, 1953 in Las Vegas, Nevada. Her Aunt, only a year old, subsequently played outside for 18 months following the test. “I became obsessed with the connection between my aunt innocently playing in this contaminated environment and then dying prematurely from cancer as an adult,” says Sipe. In her sculpture the reference to cancer is clear, objects are taken over by the presence of other objects. 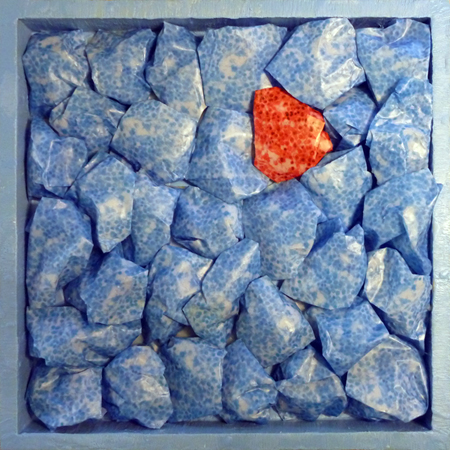 Lisa Marie Sipe, “It Started with a Back Ache,” 18 x 18 inches, encaustic and mixed media on wood

About the Artist
Lisa Marie Sipe is an abstract artist who primarily uses encaustic and acrylic. Sipe’s success as an artist has been recognized in The Arizona Republic’s article “Making their Mark,” as well as other publications, including the artist of the month in Phoenix Magazine and the artist spotlight in Ignite magazine. Her work has been exhibited twice at the Southwest Biennial at Tucson Museum of Art as well as Shemer Art Center and Museum, Scottsdale Museum of Contemporary Art, City of Tempe, NAU Art Museum and Conrad Wilde Gallery in Tucson.

Born and raised in Illinois, Sipe studied at the School of the Art Institute of Chicago and Columbia College, Chicago. She moved to Arizona in 1995, earned a Bachelor of Science degree in Design from Arizona State University and now calls Phoenix home.